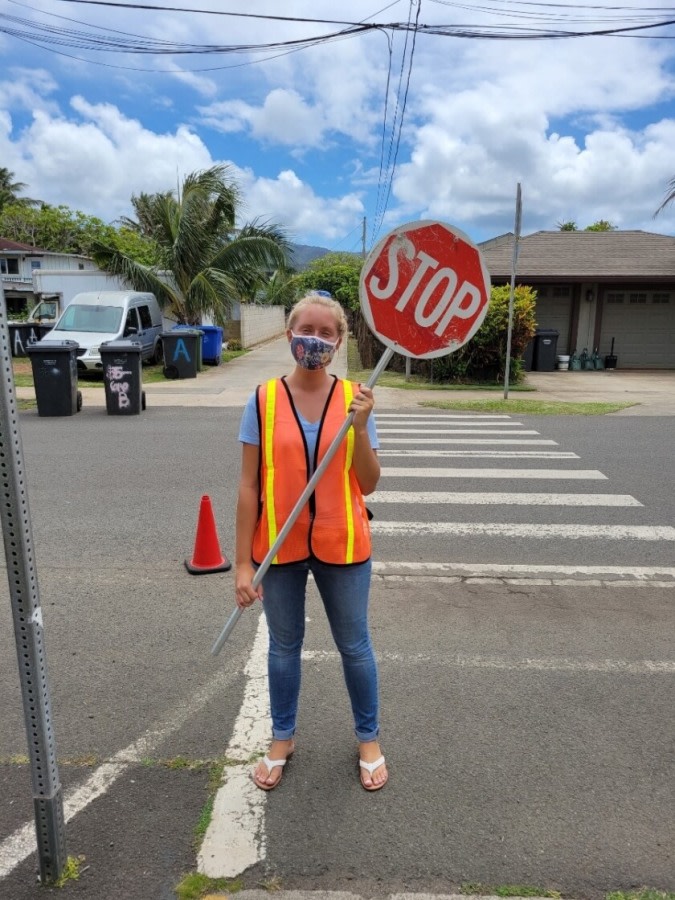 When Tiera Kammerman volunteered at Laie Elementary School as a crossing guard for one of her peacebuilding classes, she said at first, the children were hesitant about her being there. However, as she tried to connect with them in simple ways like greeting them individually, she said they opened up with gratitude, smiles and acceptance.

On her last day of school, Kammerman said one of the little boys was walking home with his family, and she wished them a good summer. As they walked away, she said the child “suddenly [came] racing back, and he said, ‘Here Auntie,’ and [gave her] a crocheted lei.”

She said, “My heart just melted. … I felt like that was a sign of what it means to choose to look outside of [myself] and help those around [me].”

Head of the Service Center, Sydney Gwilliam, a senior from Utah majoring in business, said one of the most important things BYUH students can do is serve the Laie community with grateful hearts because they would be happier. “I want [students] to have the community become [their] family, and I want [students] to love them like that,” Gwilliam said.

Kammerman, a senior from Idaho majoring in intercultural peacebuilding, said this connection she created with the community resulted from serving selflessly instead of expecting something in return. “Being real and authentic opens the door to acceptance and connection,” Kammerman said.

From connecting with students while serving as a cross guard at Laie Elementary School to sewing burp rags and quilts to donate to new mothers, BYUH students and Laie community members said accepting and connecting with others is one of the best ways to serve.

Lauren Christiansen, a junior from Utah majoring in marine biology and member of the Marine Biology Club presidency, said service radiates outwards because as other people see BYUH students serving, they will be encouraged to serve as well.

She said, “It’s the little things that mean the most.” She added there was a time she was sick and she woke up to find a treat with a sticky note from her roommate, which said, “Hey Christiansen, I hope you feel better soon.” Christiansen said this simple act of service “made the biggest difference in [her] life and made [her] want to serve her [roommate].”

Christiansen said she saw service spread outwards at the beach cleanup she helped organize as part of the Marine Biology Club presidency. She said as they were cleaning the microplastics off of the beach, a random family on vacation asked what they were doing and if they could help.

“Asking what [people] can do for other people could make a huge difference.” She said if students know someone in need of service, they should take the initiative because no one else will do it if they don’t.

Sister LouAnne Randall, a healthcare service missionary from Idaho, said she finds ways to serve each day by praying to God each morning and asking him to put someone she can serve in her path.

Randall said she oversees a service project at BYUH where she puts together boxes of supplies for students who have newborns or for any other new parents around the community in need.

Ann Alisa, from Laie, said she oversees this ongoing service project with Sister Randall, and added this service runs off of donations. She said if students are looking for a way to serve, they can donate supplies or time.

Among other items, the boxes include a tummy time quilt and a burp rag, which students could sew on their own or in the BYUH Sewing Center. Randall explained they will be starting a monthly project for students to come to the Sewing Room to create items for the boxes. In December, she added they would add stockings into the boxes.

Being the Lord’s hands

Sister Kaylene Phillips, a service missionary from Utah working in the Sewing Room, said along with utilizing the center to help with the newborn boxes service, students can use it for other reasons, such as mending clothes, getting help with a sewing project or learning to sew. She added the Sewing Room is located in the Aloha Center and is open Monday and Wednesday from 10 a.m. to 5 p.m.

If students do not have their own sewing project, Phillips said there are opportunities to serve, such as helping students with mending they lack the time for or sewing masks to be distributed around campus. Phillips added she has seen little acts of service in the sewing center result in connection between students, families, and service missionaries.

Phillips said she was sitting in the Sewing Room one day when she received a troubling text message. She said a student saw her tearing up, and instead of walking away, asked her what happened. “She gave me a hug and said, ‘I’m sorry,’ and that made a lot of difference to me.”

Randall said these little acts of service remind her of the song “My hands are the Lord’s Hands” because it reminds her people can serve wherever they are.

As a nurse for 42 years before her mission, Randall said she has served on 10 medical trips throughout Africa doing cleft palate repairs. She said this experience “gave [her] an appreciation for feeling how much God loves all of his children wherever they are.”

Through her service experiences in Africa and at BYUH, Randall said she has found the most significant impact in serving her neighbors. By delivering the newborn boxes to young families, she said realized most students here do not have any immediate family close by them. “[People] need to reach out to each other because most people are here by themselves.”

Gwilliam said holding face-to-face service projects motivates the students at BYU-Hawaii to serve longer. “[Students] love being together. They love that feeling of uniting and being a team even with people they’ve never met. I think service really unites us as students, no matter our culture or background.”

She said only being able to do virtual service during the pandemic showed everyone the value of serving together in person. She said since starting in-person service projects, she has noticed BYUH students are more eager to help.

Although the Service Center did not hold any big projects during this past Christmas season, Gwilliam said there are little acts of service students can do on their own, such as picking up trash around campus or at the beach, writing a note to someone, cutting out snowflakes and sending them to the children’s hospital or volunteering individually at an off-campus organization.

She added any student looking for ways to serve could go to the Service Center in the Aloha Center and ask for ways to serve. She said they will help students contact places like Waimea Valley, North-Shore Land of Trust, The Wildlife Refuge, the Assisted Living Center and many more to do various services for the community. •